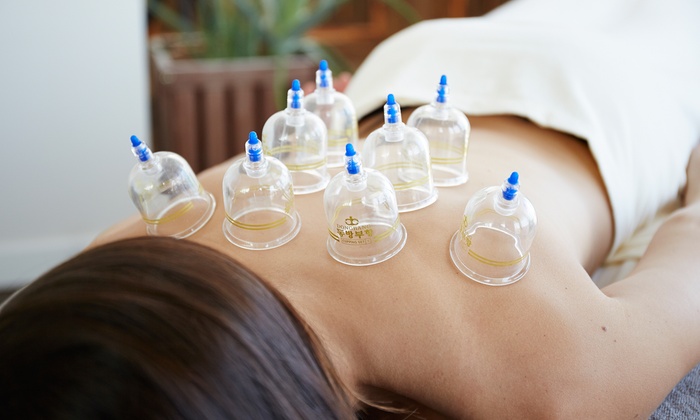 You may have heard about cupping therapy and or seen some people with the strange circle marks on their body and wondered what this ‘health and wellbeing craze’ is all about?

In this blog I explain what it is, how it works, its origins and why it has become so popular over the last few years.

What is this crazy craze?

Basically, cupping therapy is a form of alternative medicine where a suction is created on the skin and is drawn each cup thereby creating a vacuum inside the cup in a specific area.

The vacuum is created by either heating and then cooling the air in the cup, or by using a mechanical pump.

The cup/s can be left on the skin anywhere between a few up to fifteen minutes and it can, among other things, help to treat different types of pain, muscle scar tissues or knots and swelling.

Cupping generally creates a tight sensation where the cup is place and often clients will find this sensation relaxing and soothing.

Depending on your individual comfort and the assessment of the problem for which you are being treated, cups may be moved around or left in place. One of the most common areas of the body to be cupped is the back, although cups work well on other areas, too such as the fleshier parts of your body like your thighs.

Cupping treatment can cause your skin to temporarily turn red, blue or purple, especially if there is an injury or blockage in the area that is being cupped. This skin discoloration can last anywhere from a few days to a couple of weeks but it is rarely painful.

Once the marks have cleared, the procedure can be repeated until the condition or ailment is resolved.

According to online research, the practice of cupping has been performed by individuals without any medical background for over 3,000 years – from as early as 3000 BC.

The Ebers Papyrus, written c. 1550 BC and one of the oldest medical textbooks in the Western world, describes the Egyptians’ use of cupping, while mentioning similar practices employed by Saharan peoples.

In ancient Greece, Hippocrates (c. 400 BC) used cupping for internal disease and structural problems. The method was highly recommended by Muhammad and hence well-practiced by Muslim scientists who elaborated and developed the method further. Consecutively, this method in its multiple forms spread into medicine throughout Asian and European civilizations. In China, the earliest use of cupping recorded is from the famous Taoist alchemist and herbalist, Ge Hong (281–341 A.D.)

Eventually, cupping spread to ancient cultures in many countries of Europe and even the Americas and was widely used to treat common colds and chest infections, mostly in the form of ‘wet cupping’ also known as Artificial Leeching (the therapist or practitioner makes tiny incisions in the skin to dredge the blood or poisons out).

By the late 1800’s, cupping began to lessen in popularity and was discredited by newly established scientific methods of medicine that focused on treating the inside of the body as opposed to the outside. As cupping was a skin treatment, it was inconsistent with the new scientific medicine.

A wealth of celebrities including Olympic swimming gold medallist Michael Phelps, US gymnast Alex Naddour, boxer Anthony Joshua, reality star Kim Kardashian, actresses Gwyneth Paltrow and Jennifer Aniston, fashion icon Victoria Beckham and more have been reported to have used the therapy for various treatments of aches and pains, so it’s not difficult to see why cupping has become popular again.

Although there is limited research to confirm the effectiveness of this ancient therapy treatment, YouGov research finds that many people – in several cases a firm majority – remain positive about the effectiveness of alternative medicines. Even for treatments with no scientific or professional recognition, public opinion is divided at worst.

I believe that doing your research and understanding what treatments are available, including alternative ones, is the only way that you can make an informed decision as to whether or not something is right for you.

If you would like to find out more about the cupping or other treatments that I provide at Lifestyle Therapies and whether or not it would be beneficial for you, please get in contact.